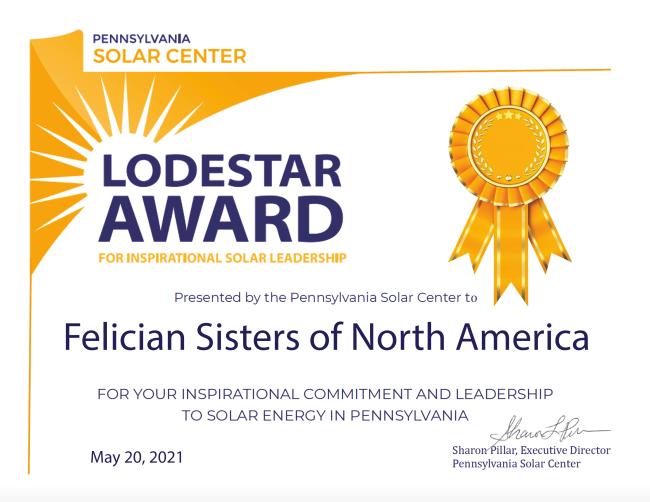 The Pennsylvania Solar Center has presented the Felician Sisters of North America with the prestigious Lodestar Award, a distinction given to Pennsylvania entities who are leading the way investing in clean and renewable solar energy. The word Lodestar historically refers to a star used in navigation; in this case, it connotes an entity that is leading the way in leveraging solar energy.

Sr. Mary Jean Sliwinski, Provincial Sustainability Coordinator for Our Lady of Hope Province, was one of the speakers at the ceremony as she accepted the first Faith Leader Award. “Our Beaver Falls site is a 365 KWh system with 1,178 panels;” she said. “To date, it has produced 1.6 GWh of power and kept 973 tons of CO2 emissions from the atmosphere. The panels supply 85% of the buildings energy needs.”

As early as the Provincial Chapter of 2011, the Sisters of Our Lady of Hope Province expressed an intent to more actively increase the province’s environmental stewardship. During the next few years, the province reviewed its recycling practices, and the sisters educated themselves on climate change and our carbon footprint.

By early 2015, Provincial Minister Sr. Mary Christopher Moore wrote to the sisters to inform them that “the use of solar power is a real possibility for us.” In her letter on February 13, 2015, she said, “I am excited that we are moving forward in an effort to reduce our carbon footprint.” She continued, saying, “The Felician Sisters serve as prophetic witness to a world in need of healing – the poor and marginalized of our society as well as the very earth which sustains us. Our solar project is a highly visible witness of our commitment to be responsible stewards of creation.”

More and more, Pennsylvania businesses and organizations are choosing to go solar, and not just for sustainability reasons. Investments in renewable energy sources like solar and wind are also extremely cost-effective, paying for themselves relatively quickly and then achieving impressive cost savings down the road.

According to the Finding Pennsylvania Solar Future Project, increasing the solar portion of the state’s electricity mix from the current 0.5 percent goal to 10 percent by 2030 would create upwards of 100,000 jobs and result in a net economic benefit of $1.6 billion annually. The current 0.5 percent goal is set to flat-line May 31st, but if the state’s General Assembly would increase it, they would boost economic recovery at a crucial time.

“We are so pleased to present these organizations with the Lodestar Award, which recognizes them for their visionary leadership in choosing to invest in sustainable solar energy,” said Sharon Pillar, executive director of the PA Solar Center. “Solar energy is the way of the future, and we hope that their inspiring commitment and stewardship will be lauded and emulated across the community in the years to come.”