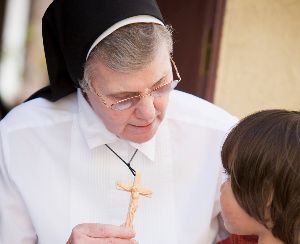 The Felician Sisters are an international community of more than 1,000 vowed women religious across four continents. We minister to God’s people in the United States, Canada, Haiti, Brazil, Poland, Italy, England, France, Kenya, Estonia, Russia, Ukraine, and the Amazon.

Founded in Poland in 1855, the first Felician Sisters arrived in North America in 1874. With the blessing of our Foundress Blessed Mary Angela, five pioneering Sisters left their homeland to minister to the children of Polish Immigrants in Polonia, Wisconsin. By the early 20th century, Felician Sisters were a significant presence across much of the United States, and they soon had established a presence in Canada as well. Recently, we once again extended the reach of our ministries with the establishment of a mission in Haiti.

The Felician Sisters of North America formed Our Lady of Hope Province in 2009 by uniting eight Felician provinces from across the U.S. and Canada in order to help sustain and expand our mission. Today, we continue to minister in a variety of ways across the continent as we seek to fulfill our mission to “cooperate with Christ in the spiritual renewal of the world.”