Season of Creation 2022: The Burning Bush 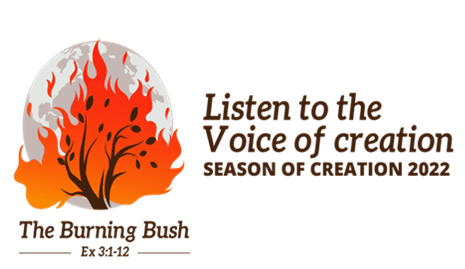 The Season of Creation is a time to renew our relationship with our Creator and all creation, through celebration, conversion, and commitment together in prayer and action. The season began on September 1—the Day of Prayer for Creation—and ends on October 4—the Feast of St. Francis of Assisi. St. Francis is the patron saint of ecology beloved by many Christian denominations, and the basis of the Felician Sisters’ Franciscan spirituality. Not only did St. Francis care for the poor and sick, but he preached multiple sermons on animals, and wanted all creatures on Earth, including humans, to be treated as equals under God.

This year's theme is “Listen to the Voice of Creation”, inspiring us to listen to the voice of the Earth. The Burning Bush symbol is inspired by Exodus 3:1-12 — “I have heard their cry…I know their sufferings…Come, now! I will send you…I will be with you.” Many voices are muted in public discourse around climate change: those who are already suffering the impacts of climate change, those who hold generational wisdom about how to live gratefully within the limits of the land, and those of a diminishing diversity of more-than-human species. The 2022 Season of Creation theme raises awareness of our need to listen to the voice of all creation.

On the contrary, the fire that called to Moses as he tended the flock on Mt. Horeb did not consume or destroy the bush. This flame of the Spirit revealed God’s presence. This holy fire affirmed that God heard the cries of all who suffered and promised to be with us as we followed in faith to our deliverance from injustice.

To take part in this season, try activities such as: worshipping outside, contemplating your local ecology (forest, a river, hills, etc.), encouraging and taking part in sustainable living, and participating in campaigns that call for ecological restoration.