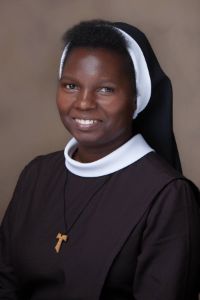 Born and raised in Kenya, Sr. Bakhita felt called to religious life from an early age. With the support of her family, she joined the Missionaries of Charity, a congregation established by Saint Teresa of Calcutta, in Kenya in 1999 and made her first vows in 2002. After spending five years ministering to the poor in Mexico, she was sent to the United States for a year of tertianship and made her final vows in 2008.

After much prayer and reflection, Sr. Bakhita began to recognize “vital unfulfilled yearnings” in her heart. “God's ways are not our ways!” said Sr. Bakhita. “My finding and transferring to the Felician family were part of the puzzle of His Divine Providence. I had a great spiritual guide who accompanied me through the whole process just to make sure that it was God in action and not self. The Missionaries of Charity Superiors, whom I love dearly, were kind, understanding and supportive. As soon as it became clear to them that Jesus was leading me, they quickly gave me a green light to begin my process with the Felician Sisters.”

After spending some time with the Felician Sisters in Enfield, Connecticut, Sr. Bakhita visited the Provincial House in Beaver Falls, Pennsylvania, and felt immediately a sense of belonging, saying, “I knew this was the family. Over these four years with them I have found that all my earlier unfulfilled yearnings are now met. I thank the good Lord for all his love, care and mysterious operation in my life.”

Sr. Bakhita made her profession of perpetual vows to the Felician Sisters on July 13, 2019, and is currently a student in the nursing program at Madonna University in Livonia, Michigan.

Video of Sr. Bakhita's Perpetual Profession of Vows on July 19, 2019