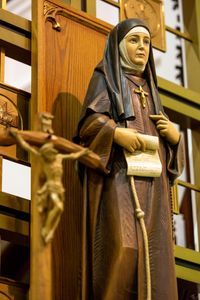 The Poland into which Sophia Camille Truskowska was born in 1825 was complicated by war, political unrest, and an absence of social services to meet the needs of the most vulnerable of society. Her family’s devotion to their faith and her father’s experiences as a judge in the juvenile court system shaped her understanding of the world around her and led her to recognize and respond to the cries of the poor.

As Sophia walked the streets of Warsaw, she saw women and children who had been abandoned by society. They lived on the streets with no access to food, shelter, or education. They were forgotten, but they did not escape the attention of a young woman who could not ignore their suffering.

At a time when women had limited rights and opportunities, Sophia set out to be an agent of change. With financial help from her father, Sophia and her cousin Clothilde rented two attic rooms, which they used to provide housing, compassionate care, and education to those in need. When they outgrew those two rooms, they sought benefactors to expand their ministries.

On November 21, 1855, Sophia and Clotilde dedicated their lives to God, sparking the birth of a congregation who would come to be called the Felician Sisters. What started with two women eager to serve wherever there was need, would be a sisterhood of thousands across the globe who would commit themselves to lives lived in compassionate service wherever there was a need and without bias.

As the reputation of the Felician Sisters in Poland spread, they were called to serve in the villages’ day care centers, schools, religion classes, and various social services. The Russian government even called upon them to serve in makeshift field hospitals to tend the wounded soldiers. The Sisters answered this call but insisted on treating soldiers on both sides of the conflict.

When the Sisters were disbanded by the Russian government, they met the challenge with strength and ingenuity. They continued to secretly keep in touch and refused to abandon their identity as vowed women religious. Some even wore their habits under their clothes to hide them from the watchful eye of the soldiers.

Despite debilitating migraines, loss of hearing, and the pain of malignant tumors throughout her body, Mother Angela led her Sisters until 1869, at which time she humbly resigned from the role of leadership. Though she was diagnosed with cancer, Mother Angela refused treatment and offered her suffering as a sacrifice on behalf of her Sisters and those they served.

From her deathbed, Mother Angela received word that the Constitutions of the community were approved by Pope Leo XIII. On April 18, 1993, St. Pope John Paul II beatified Mother Mary Angela, saying, “Blessed Mary Angela’s life was marked with love. She was concerned about all people: those hungry for bread, the heartbroken, the homeless, and those hungering for the truth of the Gospel.”

Today, the Felician Sisters continue the legacy of their foundress, Blessed Mary Angela Truszkowska, by serving wherever they are needed and without bias. Like Sophia, they see the need and hear the cries of the poor, and like her, they are unable to ignore them.