An Advent Gift to United Stand 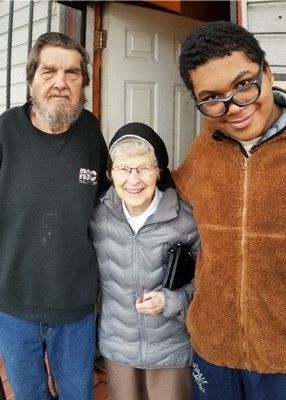 Each Advent, the Felician Sisters of Mother of Good Counsel and Our Lady of Angels Convents in Chicago, IL, take up a collection for a mission in need. This year, they collected $2,000 which they donated to United Stand Counseling Center, a nonprofit that provides support to special needs students at approximately 100 Chicago-area Catholic schools.

United Stand, which was founded by Felician Sister Kim Marie Mis in 1987, provides much-needed academic, behavioral, and psychological support to children enrolled in Catholic schools that don’t have the means to provide those services to their students and families.

Sr. Kim, who is also the Executive and Clinical Director of United Stand, said, “During this already unusual year, the Office of Catholic Schools decided on an extended Christmas Break in order to increase safety from COVID – which, for the poor, translates into little or no contact or support from the school, wherein children are usually cared for by teachers and staff, including United Stand counselors. This also means increased food insecurity, since no school lunches are served to them. Staff does do some outreach, but post-Christmas time remains a hard time.”

The Sisters hope their donation will help get United Stand Center over the January hump. Sr. Mary Julie Weckwerth said, “It should be noted that the Chicago sisters give year-round support of United Stand, checking in often, as they have for many, many years. There is a real sense of Felician stewardship for this ministry. This year, that support and giving culminated in their Advent generosity. The Mission came alive in the cold of winter and in response to the accompanying needs and sparse resources of January.”