"We see no way out, but we never despair." 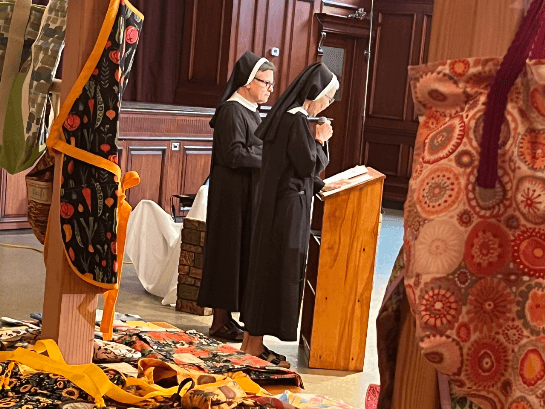 With broken hearts and overwhelmed by mourning, we write our story, a miracle of God’s providence and the power of prayer of so many people.

For over two years, life in Haiti has been very difficult. After the assassination of the President in July 2021, it became worse. Gang violence, kidnappings, rape, senseless killing of innocent people — including children. The gangs were controlling many parts of Port au Prince, the capital. This violence displaced many families who were forced out of their homes to live in tents in mountain areas. Then the situation changed and Jacmel started to experience violent demonstrations.

Since August, there has been no way to do any group activities in our mission. Besides dinner, we were giving peanut butter sandwiches and water all day to children and other hungry people who came to our door. Every day it was getting more difficult to buy gas, food (even bread), propane gas, and drinking water; prices were rising unbelievably high. Our Haitian brothers and sisters knew that our presence in the city might provoke demonstrators to violence.

On the feast of Our Lady of the Rosary, October 7, we had some people in the sewing school; many teenagers were working around the mission and coming despite the demonstrations — because they knew it was peaceful, and they would be able to eat. At noon, we all gathered under the tree to say the rosary for peace in Haiti and in the world. We received a phone call with a warning that violent demonstrators had just entered Caritas. Our mobile clinic works under Caritas. The Catholic school and Caritas were looted and ransacked; cars and containers were burned. Later, we heard rumors that the demonstrators were planning to kill the director of Caritas. The week before, the office of the electric company was attacked and destroyed. People have not had electricity provided by the city for months already.

Up to this point, nothing has happened to our mission. Maybe it is because of the prayers of +Sr. Victoria Indyk, who buried medals of the Immaculate Heart of Mary in every corner of the buildings during the time our mission was being built. We hope it will stay safe.

Many other charitable institutions have been attacked and destroyed throughout the country. In Jacmel, for example, demonstrators took the body of a man who died from tear gas that police used and carried the body from the church to the police station, only to raise more hatred and violence. Later, in the same place, people were demonstrating against the USA, waiving a Russian flag and declaring that they do not want the United States or Canada sending military troops to defend them.

After many urgent messages from the U.S. embassy to leave Haiti immediately, and after discerning with our sisters, we made the decision to return to the USA. The most difficult part of the journey was to get a little plane from Jacmel to Port au Prince. Our internet had been scattered, and communication was getting more and more difficult, but you have to go on the day they tell you and at the hour they assign. Our day was October 10, Feast of Blessed Mary Angela. Arriving at the airport in Jacmel, we were immediately rushed to the plane and left right away because demonstrators were approaching the airport; the pilots were afraid the plane would be destroyed. Thank God for our pilot friend, who helped us get a plane out of Port au Prince to the Dominican Republic. We have friends in Santo Domingo, who met us at the airport and welcomed us to stay overnight in a retreat house. We had standby flights on Tuesday to JFK.

There are three people staying in our mission. They continue to feed hungry or starving people. We left them means to do this, and we will continue to do so. Our mobile clinic works whenever they can. For the poor, it is on some days the only place where they can get help or medications.

We do not feel that we deserted or abandoned our people. We had to make a decision for this moment that was the better one — not only for us, but for our mission to be safe. We knew of how Haitian people resisted any outside help to resolve gang problems, and especially do not want military help from the USA. We arrived to the States with nothing of our own. We will return to Haiti as soon as possible. Pray it is soon.