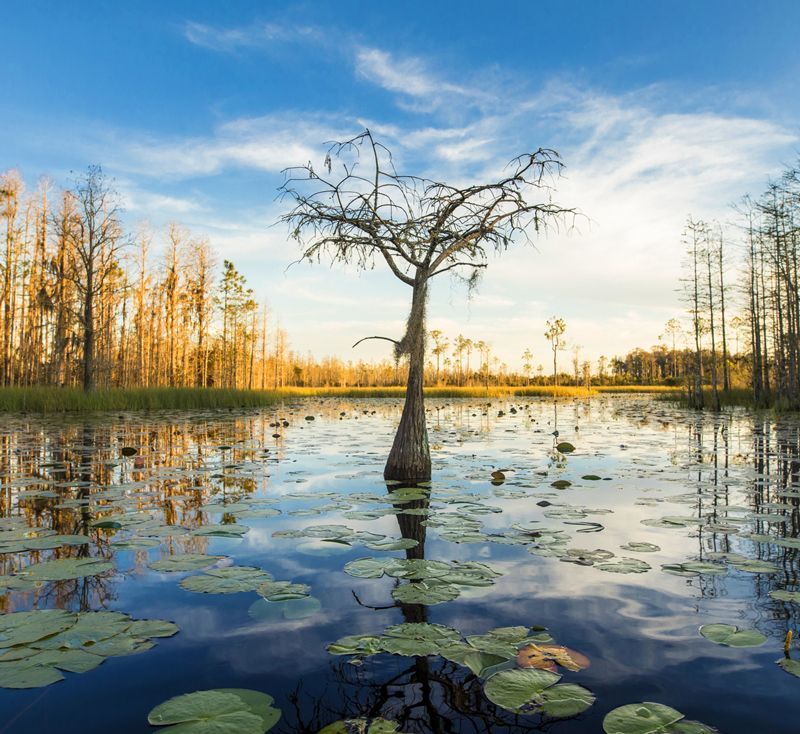 Felician Sisters are always nurturing caregivers, but sometimes they have to play offense. Their recent strategic move in Georgia demonstrates the Felician commitment to environmental justice.

Most of the Okefenokee National Wildlife Refuge in southern Georgia was designated for conservation by President Roosevelt in 1937, and Okefenokee Swamp, formed more than 6,000 years ago, is a marvel of biodiversity. Home to more than 600 plant species and 400 animal species, the refuge is now threatened by a potential mining project.

“It’s an ecosystem that could be harmed permanently,” said Sr. Mary Jean Sliwinski, Provincial Sustainability Coordinator for the Felician Sisters of North America.

Twin Pines Minerals, LLC is planning a 12,000-acre titanium mining project along the edge of the refuge. If this happens, mine drilling will deplete more than one million gallons of water per day from the Floridan aquifer and lower water levels in Okefenokee Swamp, potentially leading to habitat destruction and increased risk of catastrophic wildfires. This is a cause for concern since there is already endangered wildlife whose survival depends on North America’s largest blackwater wetland like the vulnerable gopher tortoise and the bald cypress tree.

“When you think of the swamp, the trees, and the creatures, of all that exists within that ecosystem, they are voiceless,” said Sr. Jean. “So, while we often stand for people who are voiceless, sometimes our Earth is voiceless as well.”

While Twin Pines, the company proposing the mining project, is not publicly traded, The Chemours Company, a multibillion-dollar chemical company spun off from DuPont with other mining operations in Georgia that has shown interest in acquiring the project or at the very least purchasing the titanium it produces, must answer to its shareholders. Just as the Felician Sisters participate in the Investor Alliance for Human Rights to raise awareness of human trafficking in global products, they used their status as Chemours shareholders to speak for the planet.

On behalf of the Felician Sisters Green Century Capital Management, an environmentally responsible investment firm, filed a shareholders resolution to Chemours in November, asking that they never operate or profit from the proposed Twin Pines mine.

In response to this proposal, Chemours stated it has no current or future interest in buying the proposed Twin Pines Minerals, LLC mine, or in buying the company itself. Chemours also committed not to do business with Twin Pines or buy titanium from the Okefenokee-adjacent project at any time in the foreseeable future. Chemours announced a further commitment to “ensure the value of the Okefenokee is maintained” and made it clear that it has no plans to mine next to the refuge.

This is a notable victory for environmental justice. Sr. Jean and the Felician Sisters will continue to vigilantly monitor activities that threaten our natural world and raise their voices in defense of the earth using every resource in their power.