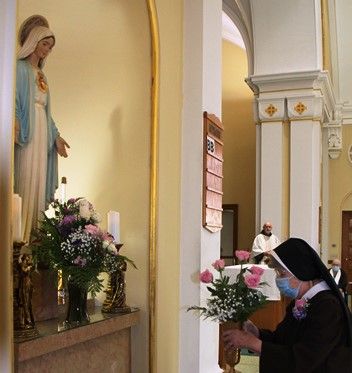 The sisters and friars of Our Lady of the Angels Convent in Enfield, Connecticut, celebrated 60 years of religious life for Sr. Frances Marion Bonczar, Sr. Janice Marie Gaudette and Sr. Joan Marie Swierzb on Saturday, August 1.

Several sisters from local homes joined the jubilarians for the Eucharistic Liturgy of Thanksgiving. Since August 2 fell on the 18th Sunday in Ordinary Time this year, the sisters also celebrated the solemn feast of Our Lady of the Angels of the Portiuncula, patron of the former province. The friars, who are members of a province named in her honor, also held the day in special regard.

Chaplain Father Mitchell Sawicki, OFM, Conv., presided. In his homily, he told stories about each of the jubilarians, highlighting the blessings they had been for others as well as the blessings they received through their lives of service in community.