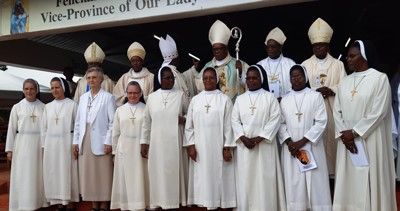 Felician Sisters across the globe had even more reason to celebrate on this Founders Day, November 21, 2019, as it marked the inauguration of the Vice-Province of Our Lady Mother of Africa in Embu, Kenya.

In 1983, Kenyan bishop Rt. Rev. Silas S. Njiru was in search of missionaries to aid in the work of his diocese. When he met Pope John Paul II and told him of his plan to seek missionaries in Poland, Pope John Paul II directed him to Warsaw. It was there that he met the Felician Sisters, who soon agreed to begin a mission ministry in Kenya.

On May 1, 1983, five Felician Sisters arrived in Kyeni in the Meru Diocese. They began working in schools and hospitals. While the adjustment to the climate and culture was challenging, they found themselves joyfully welcomed by the people. Soon, more Sisters joined them and many more expressed the desire to become Felician Sisters.

More than 26 years later, on the 164th anniversary of the founding of the Congregation, the Felician Sisters in Kenya celebrated their inauguration as a vice-province with a five-hour liturgical celebration and a day of joyful festivities that continued until dark.

The Felician Sisters of Our Lady Mother of Africa Vice-Province, based in Kenya, are grateful that they have inherited a precious legacy which they will continue to defend, preserve, enrich and transmit to the next generation. They are especially grateful to all the benefactors in our Lady of Hope Province in North America for their contribution to the growth and finally, the establishment of the new vice-province.