Celebrating the 10th Anniversary of Our Lady of Hope Province 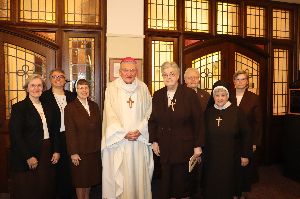 The date Nov. 21 holds great significance for the Felician Sisters. They were founded in Poland on the Feast of the Presentation of Mary, Nov. 21, 1855, when Mary Angela Truszkowska knelt before an image of the Blessed Mother and consecrated herself totally to God. Nineteen years later, on November 21, 1874, the first five Felician Sisters to serve in North America arrived at their new home in Polonia, Wisconsin, where they had been called to help minister to the immigrant and indigenous families of the area. Then, on Nov. 21, 2009, the Sisters would take another great step in the evolution of their community as the eight North American provinces joined forces as Our Lady of Hope Province.

Felician Foundress Blessed Mary Angela directed her Sisters to “serve where you are needed,” so it comes as no surprise that once they landed in North America, their charism and their ministries spread throughout the continent. Today, the Felician Sisters serve in ministries in California, Connecticut, Delaware, Illinois, Indiana, Maine, Maryland, Massachusetts, Michigan, New Hampshire, New Jersey, New Mexico, New York, Pennsylvania, Rhode Island, South Carolina, Texas and Wisconsin. They also serve in Mississauga, Toronto and Tulita, Canada, and Jacmel, Haiti.

In 2009, the Sisters merged the eight provinces across the continent into Our Lady of Hope Province, allowing for a pooling of their resources, the most important of which was the Sisters themselves. With one governing body instead of eight, more Sisters were free to minister in “total availability” to those in need, and that tactic has served them well over the past 10 years.

The Felician Sisters have always been dedicated to meeting the needs of the time, and that means adapting to the needs of the people. They have turned schools into outreach centers, orphanages into affordable housing projects, and convents into homeless shelters.

In the decade since the formation of Our Lady of Hope Province, the Felician Sisters have continued to follow the directive of their foundress to “serve where you are needed.” Currently, the Sisters are launching several new initiatives, including Deo Gratias Ministries in inner-city Detroit and the Our Lady of Grace Affordable Housing Project in Newark, Delaware. In addition, some of their current ministries, such as the Blessed Angela Spirituality Center in Pomona, California, and St. Felix Centre in Toronto, Canada, are expanding to meet the needs of victims of human trafficking, migrant families and those who are homeless.

In a time when there is so much need, the Sisters continue to listen to the cries of the poor and respond. In doing so, they have been innovative, creative and sometimes even counter-cultural. They continue to serve immigrant families, on the border and in detention centers. They not only minister to the marginalized and those living in poverty; they live among them. In the spirit of St. Francis, they go where no one else will go, bringing compassionate service to those society would seemingly prefer to forget.