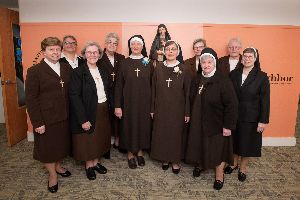 On Sunday, Oct. 27, 2019, the chapel of the Felician Sisters of North America Provincial House in Beaver Falls, Pennsylvania, was filled to capacity with joyful witnesses to the first profession of vows of Sr. Agnes Maria Trojnar and Sr. Gabriella Maria Ianieri.

The Very Rev., Fr. Howard Campbell, regional vicar, vicariate 3 of the Diocese of Pittsburgh, was the presider and homilist, while Fr. Jonathan St. André, TOR, of Franciscan University in Steubenville, Ohio, concelebrated. Following the Gospel, Fr. Howard called forth the two novices, asking what they desired of God and his Holy Church, to which they responded, "Sharing in the life of the Felician Congregation."

The examination culminated with the profession of vows for one year into the hands of Sr. Mary Christopher Moore, provincial minister. Sr. Agnes and Sr. Gabriella accepted the symbols of religious profession: the black veil, Felician crucifix, Third Order Rule and Constitutions of the Congregation of the Sisters of St. Felix of Cantalice.

Sr. Agnes and Sr. Gabriella were each given a candle as a reminder of their sacramental commitment in baptism, now deepened by their profession of vows. After the two newly-professed sisters venerated the relics of St. Francis of Assisi and Felician Foundress Blessed Mary Angela, the congregation extended their hands in blessing and prayed the Blessing of Blessed Mary Angela.

Thanks to the Sisters’ recent incorporation of livestreaming video into their communications, this event, as well as the vows of three other sisters this year, was shared with audiences across the globe, including viewers in Brazil, Connecticut, Illinois, India, Italy, Maryland, Michigan, New Jersey, New York, Pennsylvania, Poland and Texas. Sr. Gabriella’s family and friends in Italy, who were unable to travel for the event, hosted a viewing party, as did many of the sisters across the province.