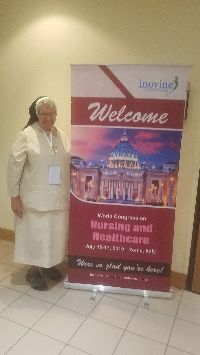 On July 15, 2019, Felician Sister Victoria Marie Indyk, CSSF, Ph.D., R.N., took the podium as a keynote speaker for the World Congress on Nursing and Healthcare. The topic of her presentation was the more than four-year-old partnership between the Madonna University nursing program and the Felician Mission in Jacmel, Haiti.

Sr. Victoria first traveled to Haiti in June 2014 to offer her expertise as a registered nurse to support the Felician mission in Jacmel that had been established in 2012 in response to the devastation dealt to the country by a 7.0-magnitude earthquake in 2010 and subsequent hurricanes. In addition to the damage done to the infrastructure of what was already the poorest nation in the western hemisphere, the people of Haiti dealt with lack of access to food, clean water and health care.

After spending three weeks at the mission in Jacmel, Sr. Victoria, who is also a professor of nursing at Madonna University in Livonia, Michigan, became inspired to do more. A collaboration between the Felician mission in Haiti and the nursing program at Madonna, which is sponsored by the Felician Sisters, seemed a natural progression.

“I felt very privileged to share in the workings of the Mission, especially helping in the mobile clinic, soup kitchen and activities with the children. . .I began making plans for study abroad trips through Madonna University.”

Since 2014, Sr. Victoria has traveled to Haiti 12 times with an entourage of nursing students and faculty from Madonna University. With their luggage full of medications, medical equipment, baby formula and other supplies, they make their way to the Felician Mission in Jacmel to provide much-needed care and education to the people to whom the Sisters minister.

The Haitian health care system has struggled to keep up with the needs of the people, the majority of whom live on less than $2 a day. With limited access to health insurance, most people cannot afford medical care. Because of the rough terrain and unforgiving climate, many people who live in rural areas have never seen a doctor. Non-government agencies such as Red Cross, USAID, Caritas, Community Coalition for Health and others have tried to help, but the needs of the people far exceed the existing resources.

At the World Congress, Sr. Victoria reported on the impact of the collaboration with Madonna University on the people of Haiti from 2014-2018. During that time, Madonna volunteers provided direct health care to the people of Jacmel through the many programs of the Felician Sisters Mission, including staffing the mobile clinic, which provides health care to 28 village sites; conducting instruction on hand washing, dental care and disease prevention; helping at the soup kitchen that feeds 50-60 children daily; providing water buckets and filters for the Water Woman Blessing program; and bringing clothes, shoes and other needed supplies for the Felician Mission.

Sr. Victoria also serves as an adjunct professor at the University of Notre Dame Nursing School in Haiti. Madonna University has helped the school raise money for a new lab, which is currently under construction, and has also provided the program with medical supplies and instructional technology.

In the four years it has been in operation, the collaboration between Madonna University and the Felician Mission has shown promising results. There have been improvements in the health of the people of Jacmel as evidenced by: a decrease in respiratory diseases, skin infections and water- and food-borne illness; increased availability of medicine, medical supplies, and healthcare; and improved nursing education for Haitians through the University of Notre Dame Nursing School in Haiti.

Though much progress has been made, the needs of the people of Haiti continue to be great. Sr. Victoria plans to continue taking groups of volunteers on mission trips to Haiti, but the persistent violence spurred by political unrest has necessitated the cancellation of two trips this year.

Sr. Victoria continues to speak at both domestic and international events about the collaboration between the Felician Sisters and Madonna University, hoping to inspire others to take up the call of Felician foundress Blessed Mary Angela Truszkowska to “serve where you are needed.”

Born and raised in Detroit, Michigan, Sr. Victoria Marie Indyk, CSSF, Ph.D., R.N. has been a Felician Sister for 50 years. She holds an M.S.N. and R.N. from Madonna University and a Ph.D. in nursing from Wayne State University. She has been a professor of nursing at Madonna University for more than 20 years.

If you would like information about volunteer mission trips to the Felician Mission in Haiti, please contact Caroline Stanfill at cstanfill@feliciansisters.org.