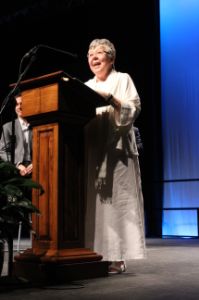 Sr. Judith is an associate professor of theology at Fordham University, and received this honor  in recognition of her “contribution to theological and liturgical catechesis, and example of Christ’s service in the Catholic Church.” Previous honorees have included Fr. Jan Michael Joncas, Jacques Berthier and the Community of Taizé, Suzanne Toolan, RSM, and Fr. Joseph Gelineau, S.J.

Music has been a part of Sr. Judith’s life from the beginning. “I grew up in a home where there was always music playing — on the piano, radio or record player and later CD player. All types of music: classical, semi-classical, Broadway shows, big band, Polish, country, rock and roll, religious, and folk music. It was all celebrated and enjoyed,” she said.

That love of music, expressed in liturgy, continued both in school and within her religious community. “When I was in grammar school, I was in the choir,” and continued in high school, along with piano lessons, she said. When she entered the Felician Sisters in Buffalo in 1964, the music program was just beginning to grow at Villa Maria College.

“I was taking piano lessons and music theory almost from the beginning, when most of my classmates were taking education courses,” she recalled, adding that her religious community sent her to what was then Rosary Hill (now Daemen) College, where she earned a degree in music, focusing on piano.

“I was teaching little kids with sticky fingers how to count half notes for half hour upon half hour,” she recalled with a laugh. But both Sr. Mary Evangeline Pieniaszek and Sr. Mary Martinelle Niemiec, who taught her piano and organ, as well as the organist at her parish, Michael Slominski, were active members of the Church Musicians Guild of Buffalo, and she was the sisters’ chauffeur. Sr. Judith would study a map of Western New York to find the town where the next meeting was to be held, and drive the sisters to it. In the process, she herself became an active member of the Guild, and would later serve as its president.

After she earned her bachelor’s, Sr. Judith completed a master’s degree in English at Canisius College. She began teaching high school English classes, but was pulled back into liturgical music by Fr. Claude Biechler, a local pastor who wanted music for midnight Mass above all else. She played for his parish, in addition to her teaching responsibilities, and he sponsored her to attend her first National Association of Pastoral Musicians convention in 1979. She decided to pursue a master’s degree in liturgical music, and upon completion, she was hired as director of music at Christ the King Seminary in East Aurora, New York.

Realizing that the men on the faculty held doctorates, but women did not, she asked for a sabbatical to begin a doctorate in liturgical theology, studying Jacques Berthier and the music of Taizé for her thesis, later published as the book “Liturgical Music as Ritual Symbol: A Case Study of Jacques Berthier’s Taizé Music.”

She then returned to Christ the King Seminary as academic dean. “I was dean for four years, and I loved it,” because of the interaction with different people and departments. “But then I realized that if I didn’t get back into the classroom, I was going to be useless,” she said, again laughing. A professor at Catholic University of America, where she earned both her master’s and doctorate, recommended her for a teaching position in theology at Fordham University.

Sr. Judith was hired for the position and has now taught at Fordham since 2001.

A development that she could never have anticipated was her creation of an undergraduate course called Great Christian Hymns. “This course takes all four of my degrees and pulls them all together. I analyze hymn texts in four contexts: music, ritual, space or architecture, and history. That was what inspired me to write my last book, ‘The Song of the Singing Assembly: A Theology of Christian Hymnody.’”

Another meaningful development has been a senior course on values titled Eucharist, Justice, Life, focusing on gathering to do the Eucharist. It reflects some of the content of her second book, “The Presence of Christ in the Gathered Assembly.” She hopes to write yet another book, on proclaiming the Word.

Sr. Judith’s award was presented at the NPM annual convention, held July 16-19 at the Raleigh, North Carolina, Convention Center. During the convention, she also offered a presentation to the assembly, “When in Our Music God is Glorified: Singing Our Communities into Transformed Life.”

She emphasized at the ceremony that the Jubilate Deo Award is truly a group recognition. “This honor belongs, not only to me, but to my family, my community, the Church Musicians Guild of Buffalo, NPM and Fordham University. All of these have nurtured my vocation as a musician and a theologian at the service of the Church’s liturgy.

“Everything has been grace,” she continued. “I have been supported, encouraged and challenged all along the way by wonderful people and outstanding organizations.”

Christopher J. Ferraro, director of music at Our Lady of Perpetual Help Parish in Lindenhurst, New York, first met Sr. Judith during the summer of 2009 when he was a student in the liturgical studies program at the University of Notre Dame, and took a class she taught, Music and Ritual.

“Being in her class was a delightful experience as she opened our eyes and ears and challenged us to see and hear music differently, particularly as it pertained to the celebration of the liturgy,” Ferraro said. “Her eloquent speaking style and her love for the liturgy manifested themselves throughout the course of the three-week summer session. She was very attentive to her students’ needs and even opened her apartment to us on the last day of class for a festive gathering.”

Their relationship has continued through their involvement in NPM.

“In 2010, I invited Sr. Judith to lead the retreat for our local NPM chapter on Long Island. She beautifully led us in a reflection on the importance of hymn singing,” he said. “Presentations like the one she gave our chapter, as well as her scholarly articles and books, have contributed greatly to the field of pastoral music and ritual music.”

Sr. Judith’s study and promulgation of Taizé, music has also been influential, he said.

“The way in which she exposes and promotes the music of the ecumenical community of the Taizé Community in France has greatly influenced the American Church,” he said, adding that in his service as chair of the Pastoral Liturgy interest section for NPM, Sr. Judith has contributed as an active committee member and also assists with grading the exams of those pursuing certification as cantors and organists.

A liturgical music reviewer for the liturgical journal Worship, Sr. Judith also writes a column on hymnody for the GIA Quarterly. She is a past president of the North American Academy of Liturgy (NAAL) and former convener of its Liturgical Theology Seminar. She also previously served as convener for the Liturgy/Sacraments topic session for the Catholic Theological Society of America.

Prior to teaching at the university level, she taught at high schools in her native western New York including Cardinal O’Hara High School in Tonawanda; Baker Victory High School in Lackawanna; Notre Dame High School in Batavia; and her alma mater, Villa Maria Academy, in Buffalo. She also taught at Sacred Heart High School in Syracuse, N.Y.