Nimeitika Wito (I Have Answered the Call) 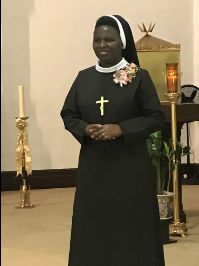 Joyful song and dance, rich tradition, and heartfelt worship brought the Immaculate Conception Convent in Lodi, New Jersey, to life on July 13 as the Felician Sisters celebrated Sister Maria Bakhita Waweru’s perpetual profession of vows. A beautiful marriage of Felician tradition and Sr. Bakhita’s Kenyan heritage, the Mass was a true testament to the global community of the Congregation of the Sisters of St. Felix of Cantalice.

Homilist Father Anthony Korir, SMA, who came from the headquarters of the Society of African Missions in New Jersey, offered greetings in both Swahili and English to everyone bearing witness to Sr. Bakhita’s vows, both those physically present in the chapel and those who were watching via Facebook Live. This included Sr. Bakhita’s family and friends in Kenya as well as viewers from California, Connecticut, Illinois, Michigan, Minnesota, New Jersey, New York, Pennsylvania, and Poland.

Among the guests at the event were singers, dancers, and musicians who added flavors of Kenyan culture to the Mass. They ushered in the Word of God with Iende Mbele Injili (Let the Gospel Go Forth) and the bread and wine with Nimeitika Wito (I Have Answered the Call). They also offered up a Communion Meditation in Swahili and celebrated Sr. Bakhita’s commitment with joyful cheers of praise. (Click here to watch the video.)

Born and raised in Kenya, Sr. Bakhita felt called to religious life from an early age. With the support of her family, she joined the Missionaries of Charity, a congregation established by Saint Teresa of Calcutta, in Kenya in 1999 and made her first vows in 2002. After spending five years ministering to the poor in Mexico, she was sent to the United States for a year of tertianship and made her final vows in 2008.

After much prayer and reflection, Sr. Bakhita began to recognize “vital unfulfilled yearnings” in her heart. “God's ways are not our ways!” said Sr. Bakhita. “My finding and transferring to the Felician family was part of the puzzle of His Divine Providence. I had great spiritual guide who accompanied me through the whole process just to make sure that it was God in action and not self. The Missionaries of Charity Superiors, whom I love dearly, were kind, understanding and supportive. As soon as it became clear to them that Jesus was leading me, they quickly gave me a green light to begin my process with the Felician Sisters.”

Sr. Bakhita visited the Felician Sisters at the Provincial House in Beaver Falls, Pennsylvania, and felt immediately a sense of belonging, saying, “I knew this was the family. Over these four years with them I have found that all my earlier unfulfilled yearnings are now met. I thank the Good Lord for all his love, care and mysterious operation in my life.”

Sr. Bakhita will begin the pre-nursing program at Madonna University in Livonia, Michigan, in the fall.