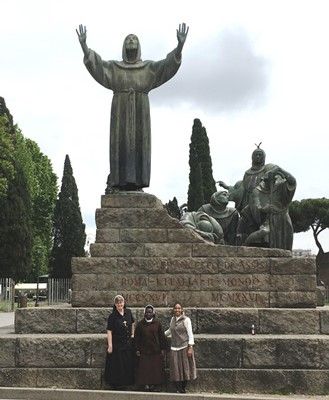 In preparation for their public profession of perpetual vows, Sisters Desiré Anne-Marie Findlay, Maria Louise Edwards, and Maria Bakhita Waweru, MC, accompanied by Sister Suzanne Marie Kush and Mary Andrew Budinski, set off on a pilgrimage to Poland and Italy. The following is Part 6 of their journey.

After returning from Assisi, the pilgrims returned to Rome, where Sister Mary Agnieszka Mruga led them on a tour of various historical sites significant in the history of the Catholic Church.

Before visiting the Papal Basilica of St. Paul Outside the Walls, the pilgrims stopped to pray at Tre Fontane Abbey, the site of St. Paul's imprisonment on charges of disturbing the public order. As a Roman citizen, Paul was placed under house arrest since legally he couldn't be tortured. There he was able to preach and receive visitors. However, he was ultimately beheaded under the persecution of Emperor Nero in 69 A.D.

In the Papal Basilica of St. Paul Outside the Walls, the Sisters prayed before St. Paul’s sepulcher and saw the chains that once bound him. Sister Maria Bakhita reflected on the experience, saying, “I became convinced of two things--the Word of God cannot be chained and ‘woe to me if I don't preach the Gospel’ was Paul's heart-beat.”

Next, the Sisters visited the Archbasilica of St. John Lateran, the Pope's Cathedral and mother of all Christian churches. It was here in 1209 that Francis and his twelve early followers received the oral approval of the Rule. This Basilica is also where the first Popes lived until the papacy moved to Avignon, France. When the Pope finally returned to Rome, through St. Catherine of Siena's insistence, the Church was under renovation. Therefore, the Pope went to the Vatican, which finally became the permanent residence for all other Pontiffs.

The Sisters ended their day at the Basilica of St. Mary Major, the location of which, according to tradition, was inspired by the Virgin Mary herself. Both Pope Liberius and a patrician by the name of John dreamt that on August 5 a hill would be covered with a blanket of snow. It was here that the Pope built the Basilica in honor of Mary. Under the high altar lie pieces of the holy crib of Bethlehem.