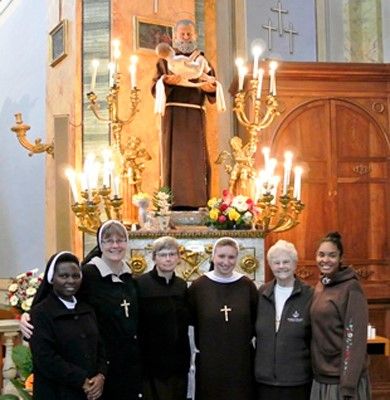 In preparation for their public profession of perpetual vows, Sisters Desiré Anne-Marie Findlay, Maria Louise Edwards, and Maria Bakhita Waweru, MC, accompanied by Sister Suzanne Marie Kush and Mary Andrew Budinski, set off on a pilgrimage to Poland and Italy. The following is Part 4 of their journey.

After saying goodbye to Poland, the Sister pilgrims made their way to Rome, Italy, where they celebrated Mass on the Feast of St. Felix at his tomb.

From Rome, they traveled to St. Felix’s church in Cantalice, the restoration of which was funded in part by the Felician Sisters. The church was built just above the home where St. Felix grew up and is adorned with a statue of St. Felix wearing his Capuchin habit and holding the Baby Jesus in his arms.

Several members of the Brotherhood of Saint Felix welcomed the Sisters and offered to take them to the Chapel of St. Felice all'Acqua, where St. Felix struck the ground with a wooden rod and, miraculously, a spring appeared. The Sisters blessed themselves with the water that continues to flow from the spring today.

The day ended with a visit to the former Friary at Cittaducale, where Felix entered the Capuchins. The Poor Clare Sisters who live there now graciously opened the chapel for them. Legend says that Felix presented himself to the local minister who sent him to this same chapel. Hours later, the local minister found Felix still praying, and he was accepted as a friar.

One priest shared his thoughts about Felix and Blessed Mary Angela, saying, “We did not choose St. Felix as our patron. He chose us…Perhaps Felix stood beside God in heaven, looked down at all the communities, and said, pointing to Mother Angela, 'Can I have this one?' Felix chose us. Certainly it is a grace we do not comprehend."