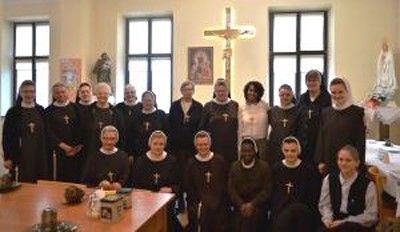 In preparation for their public profession of perpetual vows, Sisters Desiré Anne-Marie Findlay, Maria Louise Edwards, and Maria Bakhita Waweru, MC, accompanied by Sister Suzanne Marie Kush and Mary Andrew Budinski, set off on a pilgrimage to visit the Felician Sisters in Poland and walk in the footsteps of Felician Foundress Blessed Mary Angela Truszkowska. The following is Part 3 of their story.

After receiving a personal invitation from Provincial Superior Sister Mary Amadeus Pacławska, the pilgrims made their way to Przemyśl, where they received a warm and joyful welcome.

Przemyśl is a city that suffered greatly under communist rule. When the city was given to the Soviet Union after World War II, the Sisters lost everything. At the time, the Kraków province had a house in Przemyśl, a boarding school for girls. This was given to the Sisters as their new motherhouse and the Przemyśl province was established.

During their much-too-short stay in Przemyśl, the Sisters had the opportunity to tour the classrooms of the school, the same ones Blessed Mary Angela once visited. The children were eager to share songs and dances with them and show off the English that they knew.

The Sisters also visited the infirmary, novitiate, and gardens, and spend some time getting to know their Sisters of the Przemyśl province. Sister Desiré described the experience, saying, “Everywhere, we felt a unity with our sisters. We are one family. We are all daughters of Mother Angela."