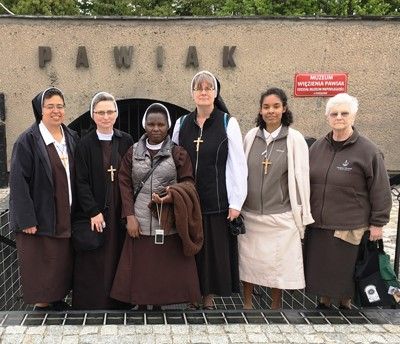 In preparation for their public profession of perpetual vows, Sisters Desiré Anne-Marie Findlay, Maria Louise Edwards, and Maria Bakhita Waweru, MC, accompanied by Sister Suzanne Marie Kush and Mary Andrew Budinski, set off on a pilgrimage to visit the Felician Sisters in Poland and walk in the footsteps of Blessed Mary Angela. The following is Part 1 of their story.

Part 1 - Warsaw, Cradle of the Congregation

The Sisters began their pilgrimage in Warsaw, where Blessed Mary Angela grew up. They walked in her footsteps along the city streets, saw the building where her father was a juvenile court judge, and visited places significant to the beginning of the Felician community.

The Sisters also learned about the impact of World War II on the community in Warsaw, and particularly about Mother Mary Simplicita Nehring, who endured many hardships during the war. As the Nazis were advancing, Mother Simplicita had an American flag flown over the convent in order to convince them that the community was a mission of the United States. Since our country hadn't yet entered the war, the Nazis only confiscated half of the convent property.

Later, however, Mother Simplicita was arrested, cruelly interrogated, and sent to Pawiak Concentration Camp in occupied Poland for nine weeks, where she was elected "Mother Superior" by sisters from different congregations imprisoned with her. The Polish Underground sent food, medicine, and Holy Communion to Mother, which she shared with others. Finally, feigning a terrible toothache, she was sent to the dentist who helped her escape.

Even after the ban on all religious communities was lifted, the Felician Sisters were still considered subversive and were refused permission to return to Warsaw. In their love for the Polish people, the sisters removed their habits and returned in secret. They began schools, teaching permitted subjects openly, but catechism and Polish heritage in secret.

As soon as the Felician Sisters were able to wear their habits again, the Polish people knelt down, kissing their hands, and thanking God, because in the hearts of the oppressed people, it was the first sure sign that freedom was not far off.

After hearing of the courage of the Sisters who returned to Warsaw in secret, Sister Desiré said with deep respect, "Learning this has given me an even greater desire to be a Felician. It is just the kind of family I want to be a part of."