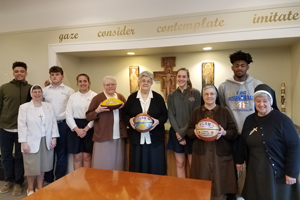 On Tuesday, the Sisters and staff at the Provincial House in Beaver Falls, PA, welcomed visitors from of Our Lady of the Sacred Heart High School (OLSH) in Coraopolis, PA. OLSH Mission Leader, Teacher, and Assistant Football Coach Jeff Hulbert brought members of the football and girls and boys basketball teams to share their successes this past season. All three teams brought home WPIAL Championships this year, and the OLSH baseball team seems poised to potentially bring home a 4th.

OLSH is a Felician-sponsored school and the students thanked the Sisters for their support. Erik Olexa said he felt “blessed” to be able to attend OLSH, especially since, as he says, “I had never won a football game until I came to OLSH.” His teammates echoed that sentiment, saying that they were thankful for the opportunities made possible by the Sisters’ support.

Sister Mary Christopher Moore, who is a graduate and former teacher and principal of OLSH, expressed how proud she was of the students for both their athletic and academic achievements.

The students left behind two commemorative basketballs and a football, signed by team members, as reminders of their gratitude to the Sisters for their prayers and support.