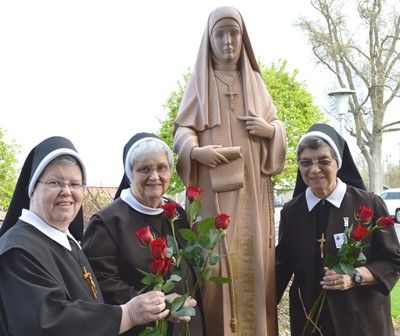 On Thursday, April 18, the Felician Sisters celebrated the 26th anniversary of the beatification of their Foundress, Blessed Mary Angela Truszkowska. Pope John Paul II beatified Mother Mary Angela in 1993, saying, “Blessed Mary Angela’s life was marked with love. She was concerned about all people: those hungry for bread, the heartbroken, the homeless, and those hungering for the truth of the Gospel.”

The instantaneous healing of Lillian Halasinski in 1984 was the miracle, researched and certified by the Catholic Church, that led to the beatification of Blessed Mary Angela. Lillian Halasinski, suffering from the excruciating pain of incurable diabetic neuropathy, prayed to Mother Angela every day for relief. On January 4, 1984, as Lillian prayed to Mother Angela, her pain disappeared and she was rendered cured of the disease.

Beatification is the first step toward being named a saint of the Catholic Church. The Felician Sisters are actively promoting the cause for the canonization of Blessed Mary Angela. For more information, please visit www.feliciansisters.org/beatification.cfm.

Prayer for the Intercession of Blessed Mary Angela

God our Father,
we praise and thank you
for the gift of Blessed Mary Angela,
who lived your will in faith and trust,
and lived your love in service to others.
I pray, in confidence, that through her intercession
you will grant me the favor which I request.
I ask this through Christ our Lord. Amen.

(With the Ecclesiastical Approval of the Vicariate of Rome)